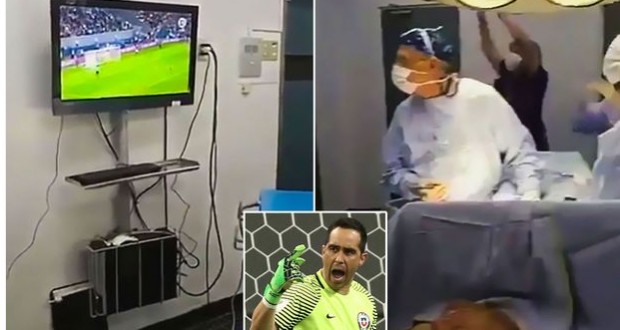 Chilean authorities called for an investigation after a leaked video of surgeons of the University of Chile hospital stopping mid-operation to watch a series of penalties with the patient on the table, Joinfo.com reports with reference to National Helm.

The scandal was caused by a leaked video recorded during the operation, which showed the surgeons stopping the operation to watch the Chilean team’s goal during the semifinal game against the Portuguese team it the Confederations Cup.

The scandal caused a leaked video recorded during the operation shows the surgeons interrupted the work to see the Chilean team’s goal during the semifinal game against the Portuguese team at the Confederations Cup.

The authorities have slammed the surgeons “irresponsible” and “without ethics”, according to the edition.

Karla Rubilar, a member of the Chile government’s Health Commission, said: “This is a serious situation. There are protocols that should be followed for the security and respect of all patients in all hospitals and health clinics. In this case, all of them were broken.”

Ms Rulibar also said that the incident “merits an investigation”.

It should be noted that the match in Kazan, Russia lasted more than two hours. The main and extra time ended without goals scored, and the reason for joy was only in the penalty shootout, which the Chilean team won with a score of 3:0.