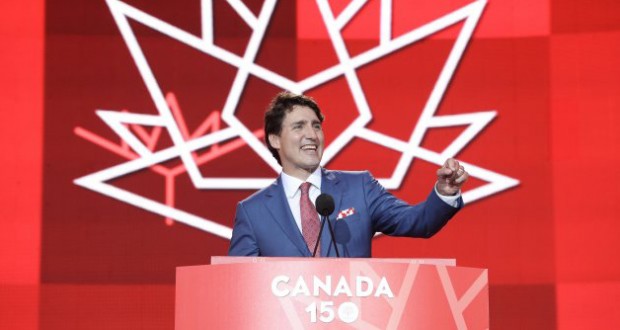 Trudeau addressed Canada’s history as one that’s “far from perfect,” tinged with centuries of oppression against Indigenous Peoples, according to Huffington Post.

“We must educate ourselves and dedicate our efforts to progress,” he told a large crowd huddled under umbrellas and maple leaf rain ponchos. “It is a choice we make not because of what we did, or who we were, but because of who we are.”

Then he began listing the provinces and territories.

“But we embrace that diversity while knowing in our hearts that we are all Canadians.”

But he forgot to name Alberta among the provinces.

Because there’s nothing more Canadian than a Trudeau completely forgetting Alberta even exists. #cdnpoli pic.twitter.com/MfBmv1L4SN

Co-host Sandra Oh didn’t let the mistake slide. The Canadian actress called out Trudeau’s gaffe during the broadcast, prompting Trudeau to pop up to say, “I love you, Alberta” before giving his head a shake as he sat back down. Then Trudeau took to Twitter to apologize again.

Got too excited somewhere over the Rockies. Sorry Alberta, I love you. Happy Canada Day!