Shares
One of the largest icebergs ever has just broken off from the Larsen C ice shelf in Antarctica. 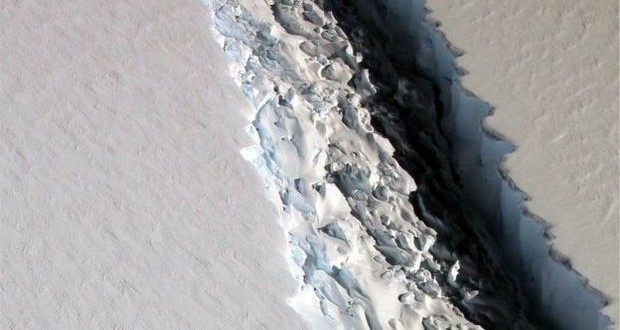 The iceberg weighs more than a billion tons and covers an area of 6,000 sq km, which is more than half of Cyprus area (9,300 sq km), Joinfo.com reports with reference to NewsMonkey.

These are impressive statistics, but still, scientists say it is not an extraordinary event.

The huge iceberg has been tearing off from Antarctica since 2010, but the rift expanded quickly during the last month. Finally, it has happened. The iceberg that separated from the Larsen C ice shelf is one of the largest bergs in the world.

The block was about 12 percent of the total plate, which is now smaller than it ever had. And although it is a major event, scientists still want to relate the impact of the fracture.

The iceberg will not have any impact on the sea level, according to the scientists. “Compare it with the ice cube in your gin-tonic,” they say. “If it melts it will not increase the volume of water in the glass.”

Martin Siegert, co-chairman of the Grantham Institute for Climate Change and Environment, also says that this does not mean that the entire ice sheet would fall apart. “I’m not worried about it,” he says. Professor Shepherd of Leeds University supports the opinion: “I’m sure Antarctica will not let it go because the continent loses a lot of ice this time of the year. It’s business as usual.”

Professor Adrian Luckman at Swansea University also does not think that Larsen C is going to face the same fate as his “brothers” Larsen A and Larsen B, which have fallen apart. Luckman also emphasizes that no link can be made between the fracture and the global warming.

Another glacier expert, Twila Moon, agrees with him, but also says that the warming of the climate has affected the possibility that this could happen. “That’s possible,” says Luckman. “But recent data even says that a large part of the shelf becomes thicker.”