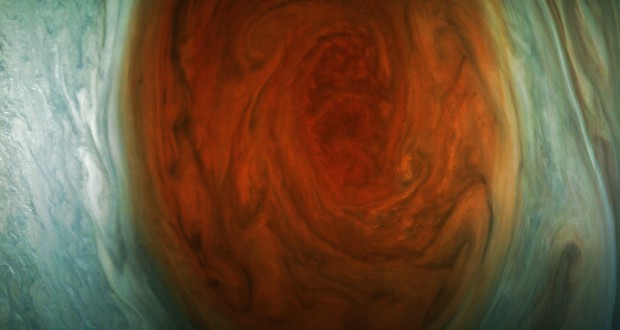 NASA’s Juno spacecraft flew directly over the Jupiter’s “Great Red Spot” on Monday, July 10. It succeeded to approach the monster storm and make a close up from a distance of just 9,000 kilometers.

As the raw images are not so impressive, citizen scientists processed and enhanced the pictures. As you can see, the edited images represent much more fascinating details of the storm.

Juno sent the images back to Earth on Tuesday, and NASA published it on Wednesday, calling on the public – so-called citizen scientists – to improve the images. And that gave beautiful results. 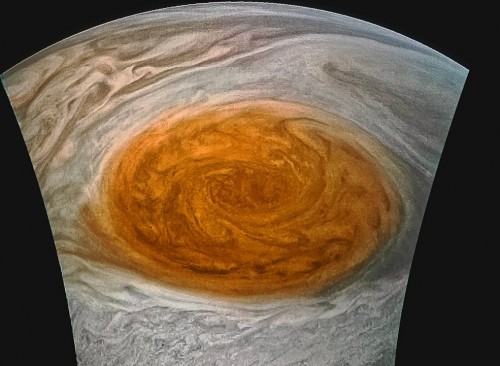 Jupiter’s Great Red Spot is about 16,000 kilometers wide, which is wider than the earth. The storm was seen for the first time 300 years ago. It is visible from the earth through a telescope.

“For hundreds of years scientists have been observing, wondering and theorizing about Jupiter’s Great Red Spot,” said Scott Bolton, Juno principal investigator from the Southwest Research Institute in San Antonio. “Now we have the best pictures ever of this iconic storm. It will take us some time to analyze all the data from not only JunoCam, but Juno’s eight science instruments, to shed some new light on the past, present and future of the Great Red Spot.”

Juno spacecraft entered Jupiter’s orbit on July 4. Juno’s principal goal is to understand the origin and evolution of Jupiter. Juno is investigating the existence of a solid planetary core, maps Jupiter’s intense magnetic field, measures the amount of water and ammonia in the deep atmosphere, and observes the planet’s auroras.

On Dec. 11, 2016, as it performed its third close flyby of Jupiter 15,300 miles (24,600 kilometers) from the planet, it caught on camera the seventh of eight features forming a ‘string of pearls’ on Jupiter — massive counterclockwise rotating storms that appear as white ovals in the gas giant’s southern hemisphere.