Shares
A stunning image received from the Cassini mission shows strange jets coming from the south pole of Saturn’s moon Enceladus, which could be a sign of extraterrestrial life 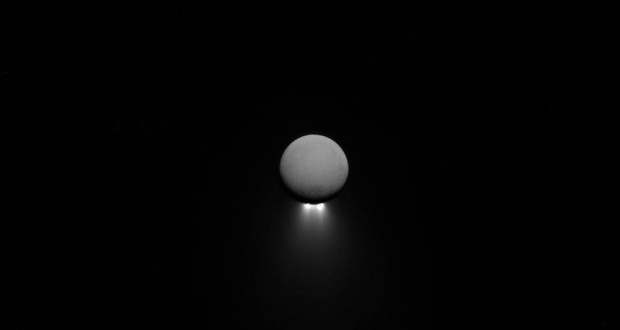 According to NASA, the picture of the jets was taken from afar. This view looks toward the Saturn-facing hemisphere of Enceladus (313 miles or 504 kilometers across). North is up. The image was taken in visible light with the Cassini spacecraft narrow-angle camera on April 13, 2017, at a distance of approximately 502,000 miles (808,000 kilometers) from Enceladus.

Observations of the jets taken from various viewing geometries provide different insights into these remarkable features.

Cassini has gathered a wealth of information in the hopes of unraveling the mysteries of the subsurface ocean that lurks beneath the moon’s icy crust. This ocean makes Enceladus the most likely candidate for the place where extraterrestrial life can be found.

It should be recalled that Cassini is circling Saturn since arriving there in 2004 for an up-close study of the planet, its rings and moons.  On Sept. 15, the mission will conclude with a final plunge into Saturn’s atmosphere. During the plunge, Cassini will transmit data on the atmosphere’s composition and then it will burn like a meteor.