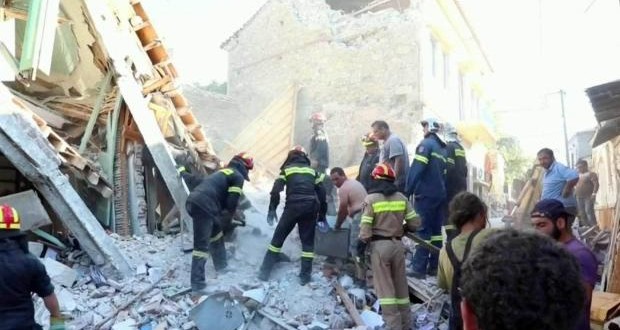 According to Greek media, two male tourists, a 27-year-old from Sweden and a 39-year-old from Turkey, were killed when a roof collapsed at a bar on Kos. At least one hundred people were injured, three of whom severely.

The region around the Turkish city of Bodrum and the Greek island of Kos were hit in the early hours of Friday. The epicenter was in the Aegean Sea about 10 kilometers southeast of Bodrum. According to the USGS, the quake was very strong – 6.7 on Richter’s scale.

According to the Euro-Mediterranean Seismological Center, 4.5 million people felt the quake. Many people fled their homes and spent the night outdoors because of panic and fear.

The earthquake also caused a small flood on the streets of Bodrum. According to the Euro-Mediterranean Seismological Center, a small tsunami was just about 25 centimeters high.

For the time being, nobody is at risk of life, according to reports from the local hospitals.

Many people posted pictures of the damage caused by the earthquake on social media.

The calm after the storm #kos #earthquake #greece pic.twitter.com/lhjdIXboy1

Before and after – can’t believe the devastation, my favourite restaurant in Kos in ruins .Stay safe people and tourists of #Kos #earthquake pic.twitter.com/hJg7GBEPWE