Shares
NASA scientists have definitively detected the chemical acrylonitrile in the atmosphere of Saturn’s moon Titan, a place that has long intrigued scientists investigating the chemical precursors of life. 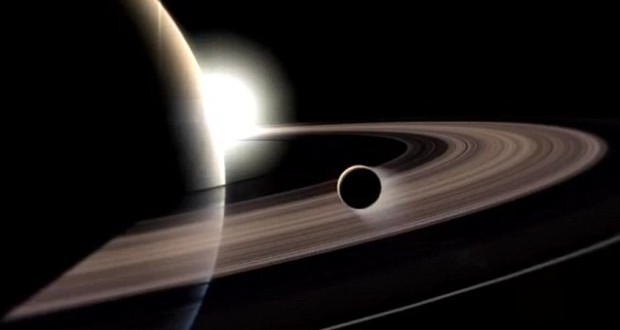 According to the report, NASA researchers have found large quantities of the chemical on Saturn’s moon Titan.

On Earth, acrylonitrile, also known as vinyl cyanide, is useful in the manufacture of plastics. Under the harsh conditions of Saturn’s largest moon, this chemical is thought to be capable of forming stable, flexible structures similar to cell membranes. Other researchers have previously suggested that acrylonitrile is an ingredient of Titan’s atmosphere, but they did not report an unambiguous detection of the chemical in the smorgasbord of organic, or carbon-rich, molecules found there.

“We found convincing evidence that acrylonitrile is present in Titan’s atmosphere, and we think a significant supply of this raw material reaches the surface,” said Maureen Palmer, a researcher with the Goddard Center for Astrobiology at NASA’s Goddard Space Flight Center in Greenbelt, Maryland, and lead author of a July 28, 2017, paper in Science Advances.

The cells of Earth’s plants and animals would not hold up well on Titan, where surface temperatures average minus 290 degrees Fahrenheit (minus 179 degrees Celsius), and lakes brim with liquid methane.

In 2015, university scientists tackled the question of whether any organic molecules likely to be on Titan could, under such inhospitable conditions, form structures similar to the lipid bilayers of living cells on Earth. Thin and flexible, the lipid bilayer is the main component of the cell membrane, which separates the inside of a cell from the outside world. This team identified acrylonitrile as the best candidate.

Those researchers proposed that acrylonitrile molecules could come together as a sheet of material similar to a cell membrane. The sheet could form a hollow, microscopic sphere that they dubbed an “azotosome.” This sphere could serve as a tiny storage and transport container, much like the spheres that lipid bilayers can form.

“The detection of this elusive, astrobiologically relevant chemical is exciting for scientists who are eager to determine if life could develop on icy worlds such as Titan,” said Goddard scientist Martin Cordiner, senior author on the paper. “This finding adds an important piece to our understanding of the chemical complexity of the solar system.”