Shares
The video clip shows how an inflatable boat carrying dozens of African migrants landed on Wednesday in the middle of a beach full of holiday makers in Zahara de los Atunes on the coast of Andalusia, southern Spain, according to Reuters. 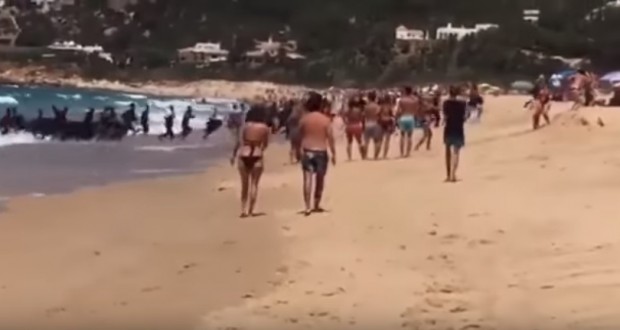 An inflatable boat landed at the Playa de los Alemanes beach at around 2 p.m. local time after crossing the Strait of Gibraltar, local media reported, according to Reuters.

The footage published by J.A.J News on YouTube showed the boat landing and the migrants jumping out and running up the beach:

The boat’s point of departure was not known and there was no immediate comment from police.

Due to good weather conditions, Spain has seen an increase in attempts by migrants to reach its shores over the past few weeks.

Over 100,000 migrants reached Europe from North Africa and the Middle East from January to June, the overwhelming majority coming by sea, according to the International Organization of Migration. Overall numbers have fallen by almost 60 percent from the same period the previous year.