Shares
NASA says a several-miles-wide asteroid will fly by the Earth, but there is nothing to worry about 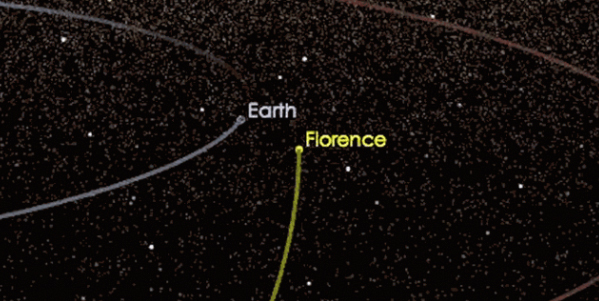 Asteroid Florence, a large near-Earth asteroid, will pass safely by Earth on September 1, 2017, at a distance of about 4.4 million miles, (7.0 million kilometers, or about 18 Earth-Moon distances).

Florence is among the largest near-Earth asteroids that are several miles in size; measurements from NASA’s Spitzer Space Telescope and NEOWISE mission indicate it’s about 2.7 miles (4.4 kilometers) in size. 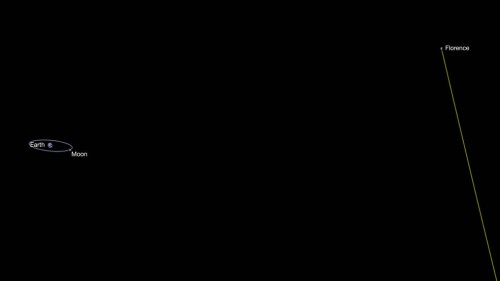 “While many known asteroids have passed by closer to Earth than Florence will on September 1, all of those were estimated to be smaller,” said Paul Chodas, manager of NASA’s Center for Near-Earth Object Studies (CNEOS) at the agency’s Jet Propulsion Laboratory in Pasadena, California. “Florence is the largest asteroid to pass by our planet this close since the NASA program to detect and track near-Earth asteroids began.”

It should be recalled that another large near-Earth asteroid 2014 JO25 passed the Earth on April 19, 2017 at a distance of about 1.1 million miles (1.8 million kilometers), or about 4.6 times the distance from Earth to the moon.

This relatively close encounter provides an opportunity for scientists to study this asteroid up close. Florence is expected to be an excellent target for ground-based radar observations. Radar imaging is planned at NASA’s Goldstone Solar System Radar in California and at the National Science Foundation’s Arecibo Observatory in Puerto Rico. The resulting radar images will show the real size of Florence and also could reveal surface details as small as about 30 feet (10 meters).

Read also: Doomsday asteroids are on their way to Earth, but we are safe for another 1.35mln years