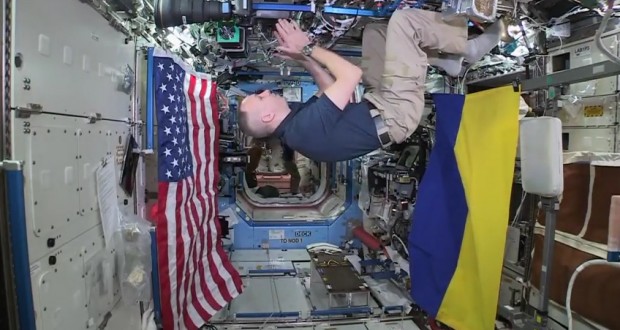 On October 25, 2017 Commander Randy Bresnik of NASA Expedition 53 shared many interesting details about the ISS with the audience that gathered at the America House Kyiv, including the US Ambassador to Ukraine Marie Yovanovitch, America House Director Christi Anne Hofland, first astronaut of independent Ukraine Leonid Kadenyuk, co-organizer of the Space and Future Forum and CosmoHack Sergiy Vakarin (UkraineIS), members of Future of Hi-Tech and Education and other CosmoHack teams and students mainly  from Ukraine and the USA.

During a 20-minute talk, the astronaut answered numerous questions. Many young people were interested to hear how to become an ISS astronaut. As Randy explained, they come from all sorts of backgrounds – for example, astronauts, engineers, medical doctors, test pilots and teachers. But they all must get the mandatory training that includes subjects like the system of the ISS and the science on the ISS, they need to learn how to fix things, ride the rocket uphill and downhill and do spacewalks. Last week Randy accomplished a 6-hour spacewalk.

Two flags were hanging behind Randy at the ISS – one was the American flag, and the Ukrainian flag was the other. There were no Ukrainians on board, so how has Ukraine’s flag turned up in space? In fact, Randy ‘s adopted son was born in Dnipro, and he got a Ukrainian flag from his trip to Dnipro and  Kyiv. Now the flag is with him at the ISS. 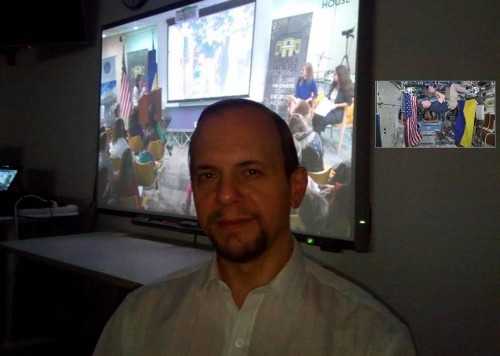 One question was about availability of Randy’ favorite food on board. Interestingly, carbonated water is not allowed at the ISS, so Randy is longing for its taste. Drinking some of it will be one of the first things he will do back on Earth, along with having a juicy hamburger and a piece of pizza.

To ensure safe stay and return of the astronauts, many threats need to be prevented. For example, here is a lot of rubbish in the space like dead satellites. Such rubbish is monitored all the time, and sometimes the station has to be moved to avoid collision with an object that is descending to the ISS orbit.

The scientific program is the most fascinating of the activities at the ISS. Currently, the astronauts are experimenting with plant growing. On Friday they will get fresh lettuce for lunch! Flight Engineer Joe Acaba grows five kinds of lettuce in space. Bresnik told that growing food is the most sustainable option for deep space missions as well as people colonies on other planets.

This experiment is a continuation of NASA’s research that also included growing vegetables in Antarctica described earlier in October by polar researcher Monty Myrtle, the speaker at the Space and Future Forum invited by UkraineIS. Sergiy Vakarin received greetings to the Forum from the previous ISS Commander Terry Virts and NASA engineer Omar Hatamleh.